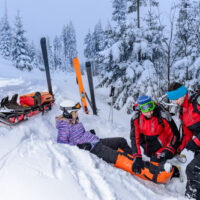 The laws and courts of New York place certain limits on the ability to sue for personal injury damages when the victims were injured in the midst of inherently dangerous activities. A recent decision, however, offers an example of the limits of the so-called “assumption of the risk” doctrine, and when a plaintiff may nevertheless be entitled to damages even when doing something that the court considers dangerous.

The Supreme Court Appellate Division, First Department recently considered the case titled Horowitz v. Chen. The plaintiff, Keri Horowitz, was visiting the ski slopes to snowboard, and was standing with a friend at the base of a beginner run when the accident occurred. The defendant, Ethan Chen, suddenly came down the slope traveling, according to the court, “approximately 20 to 30 kilometers per hour,” or about 12.4 to 18.6 miles per hour. Chen collided with Horowitz, causing “significant injuries” to the woman, according to the court. Horowitz filed a lawsuit for her personal injury damages against Chen, but Chen claimed that, since Horowitz had chosen to engage in the inherently dangerous activity of snowboarding, she had consented to the risk. Chen moved to dismiss Horowitz’s claim for damages based on her assumption of the risk.

When individuals participate in sporting activities that carry unavoidable chances that the participant will get hurt, they are generally considered to have “assumed the risk” of injury, meaning that they are barred as a rule from suing the organizers or facilitators of the dangerous activity if they’re hurt. Skiing is an example of a sport where, even if the slopes and equipment are reasonably well-maintained, there remains a risk that a participant could substantially hurt themselves.

Since so many participants are injured while doing these activities, only narrow exceptions exist to permit accident victims to file a lawsuit for damages, and the Appellate Division determined that one exception applied here. The court reasoned, “Although there are inherent risks in the sports of skiing and snowboarding, participants do not consent to conduct that is reckless, intentional or so negligent as to create an unreasonably increased risk.” In other words, while participants assume the risk that they may be injured by other reasonable participants or the unavoidable risks of the sport, participants don’t assume the risk that a participant will choose to act dangerously and put others at even greater risk, and thus can sue a participant who acts that way. The court found that, since Chen was traveling at such a fast speed, directly into a gathering of people at the base of a beginner slope, and had caused such serious injuries to the plaintiff, a jury may find that he had behaved recklessly. The court denied Chen’s motion to dismiss the lawsuit and permitted Horowitz’s claims to move forward.

If you’ve been hurt in a sporting or recreational activity and feel that your rights were violated, contact the knowledgeable and compassionate Hudson Valley personal injury attorneys at Rusk, Wadlin, Heppner & Martuscello for a consultation on your claims, at 845-331-4100 (Kingston), or 845-236-4411 (Marlboro).