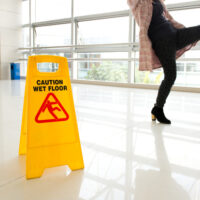 In December of 2008, Maria Alcantara suffered a serious fall while descending a staircase into a New York subway station, tripping on a large gash in the concrete on the platform leading to the staircase. In the fall, she suffered a broken hip and a traumatic brain injury which has ultimately left her unable to speak or care for herself. Four days after Alcantara’s fall, her family returned to the site of the accident to take photos of the gash in the sidewalk, but found that it had already been filled in with concrete. Alcantara filed a lawsuit against the New York City Transit Authority (NYCTA), and was awarded $16 million in money damages for her pain and suffering. The NYCTA appealed the jury’s decision in the case, titled Alcantara v. New York City Transit Authority¸ and the Appellate Division recently upheld the jury’s decision, though with a substantial adjustment in the amount of the jury’s award.

The Appellate Division upheld the jury’s finding that the NYCTA was 100% liable for the plaintiff’s fall. On appeal, NYCTA had objected to introduction of the photograph taken by the plaintiff’s family. NYCTA claimed that the photograph did not allow the jury to have an accurate understanding of the gash that once existed in the platform, as testified to by the plaintiff and other witnesses, since the crack was already filled with cement when the photo was taken. However, the court disagreed. The court noted that the photographs presented to the jury did, in fact, show how worn down the crack in the platform had become, indicating that NYCTA had months or even years to learn of the hazard and repair it. The NYCTA also argued that the photograph should not have been allowed as evidence, as it showed the addition of white cement which was not present at the time of the accident. Evidence of later-made repairs to the site of an injury is generally not admissible in court to show that the property owner was negligent, since such a policy might discourage property owners from making repairs to keep their premises safe. The court may have agreed with this argument had it been made at trial. However, NYCTA waived their right to object to this evidence when they failed to object to the evidence on this basis at trial.

If you or a loved one have been seriously injured in a slip-and-fall on someone else’s property, seek the compensation you’re owed for your medical expenses, lost work, and pain and suffering by contacting the compassionate and trial-ready Hudson Valley personal injury lawyers at Rusk, Wadlin, Heppner & Martuscello for a consultation, in Kingston at 845-331-4100, and in Marlboro at 845-236-4411.