Arrest of Woman Charged with Abuse of Nursing Home Residents 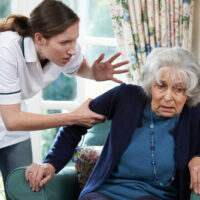 There is little which falls lower on the spectrum of human behavior than violence and cruelty toward those physically powerless to prevent it or seek help. Sadly, abuse of patients by nursing home employees remains a source of concern both in New York and nationwide, and a recent story of such abhorrent conduct draws renewed attention to concerns over nursing home resident abuse.

Earlier this month, a nursing home aide was arrested on charges of assaulting a patient in a violent incident. Noelle Otto, 28, was a certified nurse’s aide at the Crown Center for Nursing and Rehabilitation in Cortland, New York. According to the prosecutors in this case, Otto is accused of abusing a female resident on December 5, 2015. Otto reportedly covered the resident’s mouth, slapped her arms and legs, threw her feet, and slammed her arms on a bedside table. After the incident, Otto is reported to have lied to the facility’s management about the abuse, providing a false official statement. The arrest occurred after an investigation into the incident conducted by the New York Attorney General’s Office Medicaid Fraud Control Unit. Otto has pleaded not guilty and has been released in advance of a hearing on March 5.

Entrusting your elderly family members to a nursing home or assisted living facility can be a very difficult decision. You may feel unable to provide for all of your loved one’s complex care needs, or be unable to afford the high expense of in-home care. When the trust you placed in a medical facility is broken via an act of physical abuse, neglect, or theft against your feeble or mentally incompetent relative, this can leave you feeling betrayed and angry. Fortunately, New York law provides protections against such abuses, and you have a right to pursue claims against these negligent facilities for your loved one’s injuries.

If you believe an elderly loved one may be suffering from neglect or abuse at the hands of the staff of their assisted living facility or nursing home, ensure that their abusers are stopped and that any injuries are fully compensated by contacting the Hudson Valley lawyers focusing on nursing home abuse at Rusk, Wadlin, Heppner & Martuscello for a consultation on your claims. Call our Kingston office at 845-331-4100, or reach us in Marlboro at 845-236-4411.

By RWHM | Posted on February 24, 2016
Skip footer and go back to main navigation