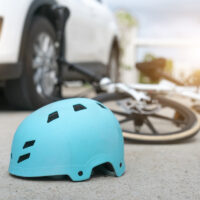 A recent accident in the Ulster County town of Boiceville has left a cyclist injured. Learn about this crash and the common type of accident that felled the cyclist below, and contact a skilled Hudson Valley bicyclist accident lawyer if you’ve been injured in a crash.

The local crash occurred on a weekday afternoon on Route 28 in Boiceville. The cyclist, a 69-year-old man from South Carolina, was headed east on Route 28, riding in the shoulder near the entrance to the Community Bank across from Onteora High School. As he neared the entrance of the bank’s parking lot, a 78-year-old Mount Tremper woman driving a 2007 Hyundai started to turn right into the parking lot. The cyclist did not have enough time to brake or avoid hitting the car, and he crashed into the passenger side of the Hyundai. The man suffered a shoulder injury for which he was treated at the scene of the accident. However, the force of the crash was sufficient to dent the cyclist’s helmet, and the man was taken to the HealthAlliance Hospital in Kingston to be evaluated for a head injury.

Cyclists’ safety is almost entirely dependent on the attention of the drivers with whom they share the road. When drivers or vehicle occupants fail to take the simple actions of using their mirrors or checking their blind spots before turning or opening car doors, bicyclists can quickly become victims of serious accidents. The recent local accident is an example of what’s known as a “right hook” crash, one of the most common ways that cyclists are injured on New York roads.

Right hook accidents can occur in multiple ways. For example, drivers may turn right into an intersection without looking for pedestrians or cyclists, slamming head-first into a cyclist who is in the crosswalk. The recent accident is an example of a driver who either saw a cyclist approaching when she planned to turn right and thought she could beat the cyclist in turning ahead of him, or failed to notice the cyclist altogether before turning. In these instances, cyclists cannot avoid a crash without swerving off the road or into traffic and are forced to collide with the turning car head-on. Cyclists can end up with sprains, soft tissue damage, broken bones, lacerations, or even traumatic brain injuries (TBI) from these accidents, and they may need to file a claim for damages to recover the costs of their medical expenses.

If you or someone you love has been injured in a New York bicycle crash, get help filing a claim for damages by contacting the seasoned and effective Hudson Valley bicycle accident lawyers at Rusk, Wadlin, Heppner & Martuscello, LLP for a free consultation on your case, in Kingston at 845-331-4100, or in Marlboro at 845-236-4411.

By RWHM | Posted on November 16, 2018
Skip footer and go back to main navigation