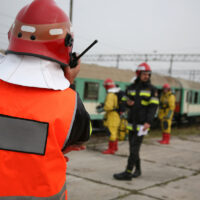 A fiery crash led to the tragic deaths of two Hudson Valley teenagers on a recent Sunday in Rockland County. The accident sent the teens’ car over an overpass and onto nearby train tracks. Continue reading for details about the accident, and discuss your case with an experienced New York car accident attorney if you or a family member has been injured in a car crash in the Hudson Valley.

Hero saves driver in fiery crash that kills two others

A 15-year-old young man from Brooklyn and a 17-year-old Pearl River teen were riding in a Porsche Macan SUV along Route 304 in Pearl River, driven by a 17-year-old girl also of Pearl River, on a recent Sunday afternoon. The Porsche collided with a 2013 Volkswagen Jetta driven by a man from Nanuet. According to the authorities, the impact of the crash sent the Porsche off an overpass and onto the tracks of the Pascack Valley Line at West Crooked Hill Road and Railroad Avenue. The combined effects of the crash caused the car to burst into flames.

The 17-year-old Pearl River High School senior was taken to Montefiore Nyack Hospital where he was later pronounced dead. The 15-year-old Brooklyn male was airlifted to Westchester Medical Center where he also succumbed to his injuries. The VW driver was not injured.

The 17-year-old female driver may have been lost as well had it not been for the actions of nearby good Samaritans. A family was heading home from apple-picking that afternoon when they saw the SUV go over the overpass. After his wife pulled their car over, a New York man ran to the fiery wreck, broke the car window with a rock, and pulled the driver to safety. The teenager was taken to Westchester Medical Center with serious injuries but as of the next morning was recovering and in good condition. The fire prevented the man and other good Samaritans from rescuing the other teens.

As of this writing, the police were still investigating the cause of the accident. Authorities reported no indication of drugs or alcohol by any driver involved. Should the Volkswagen driver be held responsible, he may face significant liability in wrongful death suits brought by the families of the deceased teens.

Likewise, if any defect in the Volkswagen or Porsche contributed to the crash or the car bursting into flame, the car maker may face serious liability. VW has recalled hundreds of thousands of cars from its Tiguan, Jetta, and other model lines in the past two years for defects including a problem with ignition keys and a risk of LED lights short-circuiting and causing fires. Porsche, in turn, has issued recent recalls due to brake warning light failures and fuel leaks. It is not yet clear if any of these defects were involved in the Pearl River crash.

If you or someone you love has been hurt in a car crash in New York, find out if you have a right to compensation for your injuries by contacting the experienced, effective and skilled Hudson Valley personal injury lawyers at Rusk, Wadlin, Heppner & Martuscello, LLP for a free consultation at 845-331-4100 (Kingston) or 845-236-4411 (Marlboro).