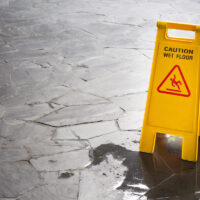 In a recent decision by the First Department of the New York Appellate Division, the appellate panel ruled that a tenant could pursue a claim for trip-and-fall injuries against his landlord for injuries received while hosting a party on the rental property’s pool deck. The claims for liability were largely based on violations of the building code and are an example of the ways that code violations can support a premises liability claim.

In the case titled Berr v. Grant, the plaintiff Michael Berr was a tenant in a home owned by defendant Ron Grant. Berr was hosting a party on the deck surrounding the home’s pool and hot tub on the day of the accident. As Berr walked along a narrow brick path separating the hot tub and pool, he tripped and fell into the hot tub, becoming injured. Berr filed a personal injury lawsuit against Grant. In it, he claimed that Grant was negligent in upholding his legal duty to maintain safe premises free of defective conditions. Grant responded by filing a motion for summary judgment, arguing that there was no legal basis for Berr’s lawsuit and it should be dismissed.

Berr largely based his claim of negligence on the fact that the layout of the pool and hot tub did not comply with relevant building code sections. Evidence of failure to comply with building codes can serve as strong support for premises liability claims. Property owners who rent their property to tenants must ensure that they have provided safe, well-maintained premises to their tenants. Compliance with the building code indicates that the property has met the bare-minimum level of safety which must be present. When buildings fail to meet the standards of safety set by the law, and an individual is injured as a result of the dangerous condition on the property, these code violations can serve as valuable evidence of an owner’s negligence.

In the case at hand, Berr presented testimony from an expert describing the ways in which the pool deck failed to comply with the building code. The defendant’s own expert argued that Berr should’ve taken another path around the pool in order to avoid injury, but failed to present evidence that the pool layout was, in fact, code-compliant. In opposition, the plaintiff’s expert presented additional evidence showing that even the alternative path around the pool failed to comply with the building code. The court ruled that there was sufficient evidence of negligence by the property owner to support the claim moving forward toward trial.

If you’ve been injured in a trip-and-fall or slip-and-fall accident in New York, seek the damages you’re owed for your medical expenses and pain and suffering by contacting the knowledgeable and seasoned Hudson Valley premises liability lawyers at Rusk, Wadlin, Heppner & Martuscello, LLP for a consultation, at 845-331-4100 (Kingston), or at 845-236-4411 (Marlboro).