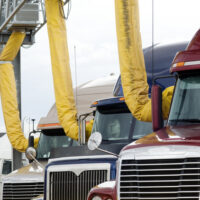 The US Senate has approved of a controversial new spending bill which would permanently threaten an important measure introduced in 2013 to protect the drivers of large trucks themselves, as well as the drivers with whom they share the road. Committees in both the US House of Representatives and the Senate have approved transportation spending bills, each with their own alterations to the federal rules governing hours of service for commercial long-haul truck drivers. The bills still must be reconciled and approved by both houses of Congress before they become law.

The measure causing controversy is known as the 34-hour restart rule. Under federal law, drivers may not drive over 60 hours in a seven-day period or more than 70 hours in an eight-day period. The restart rule allows a long-haul driver to restart his or her work week, beginning another 60- or 70-hour week, by taking a full 34 hours away from the road. In 2013, Congress passed a law requiring that drivers take only one 34-hour reset period a week, and that the 34-hour reset include two periods from 1:00 am to 5:00 am. The trucking industry protested the policy, and Congress suspended enforcement of the overnight requirements, stating that they would reconsider the rule after the Department of Transportation had conducted research on whether or not the changed rule truly made roads safer. Despite the fact that the results from the requested study are still in review, the House of Representatives has included a provision in its spending bill which would permanently eliminate the overnight requirement from the 34-hour reset rule.

Safety advocates, from private groups to the National Transportation Safety Board, are opposed to any change which might increase driver fatigue, a leading cause of truck accidents. The director of the National Transportation Safety Board, Christopher Hart, has described driver fatigue as one of the most alarming safety issues on our roads. He cited the accident which nearly took the life of comedian and actor Tracy Morgan as an example of how current laws are inadequate to address the issue. “Amazingly, the driver was in compliance with the applicable rest and duty time rules, yet he had been awake for 28 straight hours before the crash.”

Peter Kurdock, director of regulatory affairs for Advocates for Highway and Auto Safety, stated, “It’s no secret that the Tracy Morgan crash unfortunately highlighted an issue we’ve known for years in the safety community. Driver fatigue is a real problem in the trucking industry. Rolling back hours of service is simply going to exacerbate a problem that everyone is aware of.”

If you or a loved one have been injured in an accident with a tractor-trailer, semi, or other large truck, get help seeking the compensation you need to be made whole after being injured by contacting the Hudson Valley personal injury law firm Rusk, Wadlin, Heppner & Martuscello for a consultation on your claims, at 845-331-4100 in Kingston, or 845-236-4411 in Marlboro.