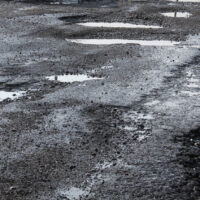 In previous posts, we’ve discussed the liability that local and state-level government bodies may face for injuries caused by poorly designed or maintained public streets. In a recent case brought before the Second Department of the New York Appellate Division, the justices considered a claim by a plaintiff against both the City of New York and private contractors for injuries he received on a damaged portion of a public street.

The opinion in which the Appellate Division considered these liability issues is titled Morris v. City of New York. The plaintiff, Larry Morris, was riding his bike along Park Place in Brooklyn when he hit a hole in the road and was injured. Morris filed a lawsuit based on his injuries, naming the City of New York and several private companies as defendants, including a sewer contractor, the electricity utility Consolidated Edison, a paving contractor, and an excavation contractor. He claimed that construction work done, or maintenance not done, by these entities resulted in the dangerous condition that caused his injuries. The private companies filed a motion for summary judgment against Morris, requesting that the court dismiss his claims against them without a trial.

Private contractors operating in the state of New York must remain reasonably careful when working in or near a public street. If they negligently create a hazard or other dangerous condition in the street, then they can be held financially liable to a member of the public injured by that dangerous condition, just as a city or state might be held liable for injuries caused by a public space in disrepair. In order to succeed on a motion to dismiss a plaintiff’s claims, the defendant contractor has to prove that they did not perform any construction work on the section of roadway where the victim was injured, or that they didn’t create the hazard that caused the victim’s injuries. In the present case, the defendants could not prove that they hadn’t worked on the stretch of Park Place where Morris was injured. One of the defendants also attempted but failed to convince the court that the hazard that injured Morris was open and obvious (i.e., were Morris riding responsibly, he would have seen it and avoided it). The Appellate Division upheld the trial court’s decision, rejecting the defendants’ attempt to dismiss the plaintiff’s claims before trial.

If you’ve been injured by a dangerous or poorly-maintained road in New York, seek the damages to which you’re entitled for those injuries by contacting the knowledgeable and trial-ready Hudson Valley personal injury lawyers at Rusk, Wadlin, Heppner & Martuscello, LLP for a consultation, at 845-236-4411 (Marlboro), or 845-331-4100 (Kingston).

By RWHM | Posted on October 17, 2016
Skip footer and go back to main navigation