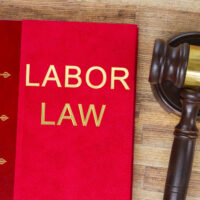 The Appellate Division has recently ruled in favor of an injured worker who claimed that he did not receive necessary safety equipment while working at a height. The case re-emphasizes the duty of an employer to provide the safety equipment workers need to remain safe, and to present affirmative proof that they met their duties when injured employees assert otherwise.

The recent case is titled Erkan v. McDonald’s Corp. The plaintiff, Huseyin Erkan, was installing tiles on the facade of a new McDonald’s location at the time of the injury, working alone. As he moved from an unsecured ladder to a scaffold, the ladder wobbled and he fell, becoming injured. The plaintiff filed a lawsuit for his injuries against McDonald’s and the contractor that hired him, Custom Commercial Construction Corp. He asserted claims under New York Labor Law §§ 200, 240(1), and 241(6), which included claims under New York’s Scaffold Law, arguing that he did not receive sufficient protection for the work he was doing at a height. Erkan also asserted a claim of spoliation of the ladder that wobbled and collapsed under him, resulting in his injuries. “Spoliation” is the legal term for the destruction of property that the party knew or should have known would become evidence in a current or future lawsuit. Spoliation of evidence can be met with serious penalties, since destroying critical evidence could interfere substantially with a plaintiff’s right to file a claim. These are the sorts of issues that a skilled construction accident attorney can investigate and pursue on your behalf which strengthen your position before the judge.

The plaintiff filed a motion for an early decision on the issue of the defendant’s liability under the Scaffold Law, which imposes strict liability on employers who fail to provide appropriate safety equipment to employees who are working at a height. The plaintiff offered a sworn affidavit saying that he did not receive safety equipment from his employer that would have prevented his fall injuries. The trial court rejected the plaintiff’s motion, but the Appellate Division granted it. “Once it is determined that the owner or contractor failed to provide the necessary safety devices required to give a worker ‘proper protection,’ absolute liability is inescapable under Labor Law § 240(1),” the court wrote. The opinion noted that the defendants would have needed to present some evidentiary proof that they had, in fact, provided the necessary equipment to the plaintiff, or that it was solely the plaintiff’s actions which caused his injuries, but the defendants failed to produce admissible evidence of either. With the issue of liability settled, the court will focus on the amount of damages for which the defendant companies are liable to the plaintiff.

If you’ve been injured on the job in New York and need experienced legal help in getting the damages to which you’re entitled, contact the knowledgeable and effective Hudson Valley construction injury lawyers at Rusk, Wadlin, Heppner & Martuscello, LLP for a consultation, at 845-236-4411 (Marlboro), or 845-331-4100 (Kingston).