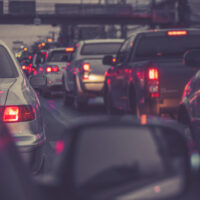 Getting home during rush hour traffic is stressful enough, but getting involved in a major car accident while trying to wade through crowded New York roads is infinitely more stressful. Your odds of being involved in a crash during rush hour are, unfortunately, even higher than those when driving at other times of day. Learn more about rush hour accidents below, and contact a Hudson Valley accident lawyer if you’ve been injured in a rush hour crash.

Analysis of National Highway Traffic Safety Administration data shows the risks faced by drivers at different times of day. While fatal crashes are most likely to occur on late nights and weekends, crashes resulting in property damage and less-severe injuries are most likely to occur during the hours of 3pm and 6pm on weekdays. According to one study, 16% of all crashes occur during these hours.

Be on the lookout for frequent causes of rush hour accidents

Since there are so many more cars on the road during rush hour, a greater number of accidents is simply unavoidable. However, there are also numerous factors making rush hour more dangerous aside from the increase in traffic, including:

Sun glare: Glare from the sun can be sudden and completely blinding. During the evening hours, the sun often sits low in the sky, making it impossible to block with sun visors. Invest in good sunglasses to retain as much of your vision as possible, and drive carefully when the sun is low in the sky.

Fatigue: You might be exhausted after a long day of work, making getting behind the wheel in slow-moving traffic even more likely to lull you into sleep. Experts list fatigue as one of the most common sources of fatal accidents. Stay alert on your drive home by getting a good night’s rest or carpooling with a friend.

Distracted driving: Staying engaged with the road in front of you and avoiding the siren call of your Facebook feed or a new text message can be a challenge while sitting in gridlock traffic. Even while in heavy traffic, though, things can change on the road in an instant. Remain entertained but focused on the road by listening to podcasts or audiobooks while you drive.

After an accident in New York, find out how you should move forward to get the money damages you’re owed by contacting a seasoned and dedicated Kingston auto accident attorney of Rusk Wadlin Heppner & Martuscello, LLP for a consultation, in Marlboro at 845-236-4411, or in Kingston at 845-331-4100.