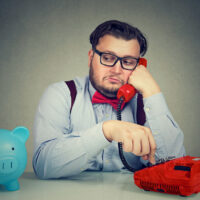 Debt collection is a serious industry, bringing in about $13.7 billion every year. Anyone who has been contacted by a debt collector knows that these companies can be highly aggressive in the tactics they use to get you to pay up. While laws exist that are intended to prevent threatening or harassing contact from debt collectors, a recent survey has found that collections companies routinely violate these laws.

The Fair Debt Collection Practices Act (FDCPA) protects consumers from being harassed or threatened by unscrupulous debt collectors. The laws make it illegal to contact consumers before 8:00 am or after 9:00 pm. They bar collections agencies from contacting a debtor’s friends, family, neighbors, or coworkers about that debt, unless they are seeking to confirm a debtor’s location. Debt collectors may not lie to consumers, nor may they threaten consumers with incarceration should they fail to pay a debt. Once a consumer has requested in writing that a debt collector stop calling them, the debt collector is nearly always required to comply with that request.

Harassment victims may have the basis for a lawsuit

Debt collectors that violate the FDCPA can face serious consequences for their conduct. The law permits a consumer who has been subjected to illegal harassment by a debt collector to file a lawsuit against that company in federal court, and consumers could be entitled to damages for the harassment they experienced. Speak with a lawyer if you believe you’ve been the victim of threatening or harassing conduct by a debt collector.

If you’ve been the victim of harassment by a debt collector, or are struggling to keep up with mounting medical or credit card debt, contact the knowledgeable, compassionate, and experienced Hudson Valley bankruptcy attorneys at Rusk, Wadlin, Heppner & Martuscello, LLP for assistance with your claims, at 845-331-4100 (Kingston), or 845-236-4411 (Marlboro).