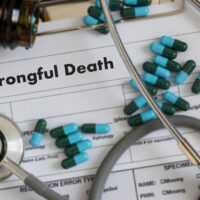 A New York family has received an award of over $26 million in a medical malpractice claim based on negligent care provided to the mother during her pregnancy. A jury issued the award in the case where one twin was born deaf and the other passed away 28 days after her birth.

In early 2010, Danielle Madden-Buck was pregnant with twin girls who were conceived via in vitro fertilization. On February 9, 2010, Madden-Buck began noticing brownish discharge and experiencing painful cramps. The woman visited Maimonides Medical Center, a teaching hospital in Brooklyn, with concerns for the health of her fetuses. She was sent home with no instructions, medications or other treatment. When the symptoms persisted, she returned to the hospital later that day, but was again sent home without treatment.

Just a week after her two visits to Maimonides Medical Center, Madden-Buck underwent a sonogram. Her physician discovered that she was showing signs of preterm labor only 21 weeks into her pregnancy. The images revealed that her cervix had shortened from three centimeters to one centimeter. She gave birth to the twin girls prematurely in February of 2010. Madelyn Buck died nearly one month after being born. The daughter who survived, Aleigha, is unable to hear and experiences vocal cord paralysis. The 7-year-old girl now wears hearing aids and communicates through sign language.

Madden-Buck filed a claim against the hospital for negligent medical care. In her claim, she alleged that, had the hospital put the mother on bed rest and prescribed certain hormones, the delivery of the twins would not have been as risky. The case went through a month-long trial before a jury at the Brooklyn Supreme Court. The jury, composed of three men and three women, deliberated for eight hours before handing down their decision. They chose to award $4 million to the mother and daughter for their past pain and suffering, $20 million for future pain and suffering, and $1.6 in future lost wages. The jury also awarded the family $500,000 for the wrongful death of Madelyn Buck.

If you or someone you love has been the victim of a birth injury, wrongful death, or another form of medical malpractice in New York, contact the compassionate and knowledgeable Hudson Valley medical malpractice attorneys at Rusk, Wadlin, Heppner & Martuscello, LLP for a consultation, in Marlboro at 845-236-4411, and in Kingston at 845-331-4100.