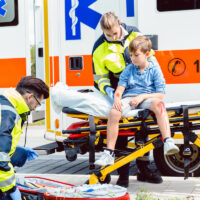 Every parent dreads the call saying that their child has been injured while spending time with friends. Since young kids often spend time riding in other peoples’ cars—their babysitter, parents of friends, and drivers for extracurricular activities—there are lots of instances where your child will be a passenger when you won’t be the driver. You may be at a loss as to how to handle a personal injury claim on your child’s behalf when you weren’t in the car. Read on to learn more about filing child passenger car accident injury claims in New York.

When a passenger is injured in an accident, receiving compensation for injuries from that accident is not usually contested in the same manner that a claim by the car’s driver might be, since there is no possibility that the passenger could be at fault for an accident. As the parent of a minor injured victim, you would file the claim on your child’s behalf.

If only one driver was involved in the crash, then the claim would be filed against that driver for the victim’s injuries. If the accident involved multiple cars, then claims should be filed with all drivers’ insurers. Unfortunately, you’re reliant on the driver with whom your child was riding as a passenger to have obtained this information. Sometimes, liability among multiple drivers involved in an accident may be contested, which can slow down the process of obtaining compensation for your child’s injuries. An attorney can both investigate the accident on your behalf to determine which parties are responsible for your child’s injuries, and make sure that all claims are filed against those drivers within New York’s strict time limits. Additionally, under New York’s no-fault car insurance program, obtaining compensation could become more complex if your child’s injuries are sufficiently serious or long-term that you will need to file a lawsuit rather than settle with an insurance company, and an attorney can help you determine whether a lawsuit is necessary or if the insurer will be willing to settle for an amount sufficient to cover your child’s claims.

If you or your child have been hurt in a car accident in New York, contact the compassionate and diligent Kingston attorney for auto accidents at Rusk Wadlin Heppner & Martuscello for a consultation on your case, at 845-331-4100 (Kingston) or 845-236-4411 (Marlboro).