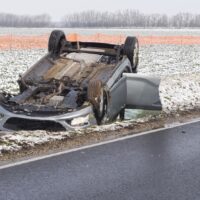 Driving fast and engaging in aggressive, dangerous driving maneuvers can lead to rollover accidents. A rollover accident is a traffic crash in which at least one of the vehicles is upended, either landing with its top on the ground or rolling over back onto its wheels. Rollover accidents are incredibly dangerous, often leading to serious injury or death. Driving at high speeds is often correlated with rollover accidents, but how does speed actually factor into the likelihood or severity of a rollover accident? Read on for a discussion of speed and rollover accidents, and reach out to a seasoned New York car accident attorney if you or a family member has been injured in a car crash in the Hudson Valley.

Speed Increases the Likelihood of a Rollover

One fact is clear: driving at high speeds greatly increases the chance of a rollover accident. Vehicles colliding at low speeds, such as a fender-bender in a parking lot, are unlikely to roll over. If at least one vehicle is driving at high speeds, then it is much more likely that either vehicle will wind up rolling over (whether it is the car going at high speeds or the lower-speed car struck by the high-speed vehicle).

One study by the Federal Motor Carrier Safety Administration (FMCSA), for example, found that as many as 45% of rollover accidents involved high speeds. While speed alone will not cause a crash, it makes a rollover much more likely. Rollovers are especially likely when a driver rounds a curve at a high rate of speed, even if there is no collision. Roughly two-thirds of rollover accidents connected to speed also involve curves in the road and whether the driver takes appropriate precautions.

If you or someone you love has been hurt in a car crash in New York, find out if you have a right to compensation for your injuries by contacting the practiced and trial-ready Hudson Valley personal injury lawyers at Rusk, Wadlin, Heppner & Martuscello, LLP for a free consultation at 845-331-4100 (Kingston) or 845-236-4411 (Marlboro).