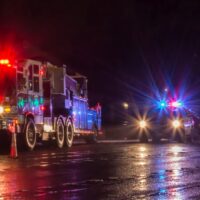 A Hudson Valley man was killed after colliding with a tractor-trailer hauling a gasoline tanker on a recent Friday night. The accident is a stark reminder of just how dangerous any accident involving a large truck is likely to be. A collision with such a massive vehicle is significantly more likely to result in catastrophic injury. See below for details about the accident, and call an experienced New York truck accident attorney if you or a family member has been injured in a car or truck crash in the Hudson Valley.

A 58-year-old man from New Windsor was killed on a recent Friday night after colliding with an oncoming semi-trailer gasoline tanker truck. According to the New Windsor Police, the Hudson Valley man was driving alone in his 2019 Subaru southbound on Temple Hill Road. A 2021 Volvo trailer truck, driven by a 27-year-old man from Berlin, New York, was heading northbound. At around 10:30 p.m., as determined in the police department’s preliminary investigation, the Subaru crossed the double-yellow lines into the oncoming northbound lane and collided with the tractor-trailer. The crash occurred just south of the entrance to Continental Manor Condominiums. The large truck was hauling a gasoline tanker full of fuel at the time.

The New Windsor man suffered fatal injuries and was pronounced dead at the scene. The truck driver was extricated from the cab of the truck by members of the Vails Gate Fire Department and taken to Montefiore St. Luke’s Hospital in Newburgh by New Windsor Emergency Medical Services ambulance. The truck driver underwent treatment for non-life-threatening injuries.

Thankfully, there was no leak from the tanker as a result of the crash. If the fuel had leaked, the accident could have become even more dangerous, with the potential for combustion and widespread damage. New Windsor Police indicated that the cause of the accident was still under investigation and that anyone with knowledge should contact the department with information.

The accident is a dire reminder of the danger posed by large trucks, as well as the general dangers still present across New York despite an apparent reduction in traffic volume as a result of the coronavirus pandemic. In many areas around the state, the number of serious traffic accidents and traffic fatalities remained the same or even increased over the last year, despite the pandemic reducing the number of vehicles on the road. Anyone seriously injured as a result of negligent driving has the right to seek compensation for their damages.

If you or someone you love has been hurt in a car crash in New York, find out if you have a right to compensation for your injuries by contacting the dedicated and professional Hudson Valley personal injury lawyers at Rusk, Wadlin, Heppner & Martuscello, LLP for a free consultation at 845-331-4100 (Kingston) or 845-236-4411 (Marlboro).