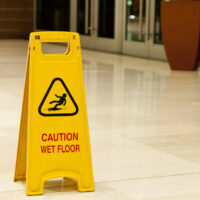 There are several elements to a successful claim for damages from a slip-and-fall accident. There must be some hazardous condition, such as a puddle of liquid, a patch of ice, or a hole in the ground on the property of the defendant owner. The owner must have either known about the hazard, having what’s called “actual notice,” or the owner would have known about the hazard if the owner had been responsibly monitoring the property, having what’s known as “constructive notice.” Additionally, the owner must have had a sufficient amount of time after learning of the hazard to repair or warn other visitors or customers of the condition.

Whether or not a property owner had notice of a dangerous condition in time to fix it prior to an injury is often the contested point in slip and fall lawsuits. A property owner will often argue that it was unreasonable to hold them responsible for injuries because even a diligent owner would not have had a sufficient amount of time to repair the hazard before the fall occurred. For example, if a business owner is notified of a puddle of water on the floor of their building and immediately turns around to retrieve a mop or “wet floor” sign, but a customer slips and falls in the intervening moments, a court might not impose liability on that property owner. Property owners will also present evidence of their regular cleaning and inspection routines and the last time they had inspected the area where the hazard appeared, in order to show that the dangerous condition formed only moments before the injury occurred. Whether or not an owner had enough time to fix or warn others of a hazard is a question for a jury or judge to decide based on facts and evidence specific to a particular case.

In a case recently decided by the New York Appellate Division, a plaintiff’s claim for slip-and-fall injuries was permitted to move forward after a defendant attempted to have the claim dismissed. The case, titled Sada v. August Wilson Theater, is centered on a visitor to August Wilson Theater. The plaintiff left the theater during intermission. When he returned 15 minutes later, the plaintiff slipped and fell on a wet staircase. Representatives for the defendant theater argued that they had no constructive notice of the hazardous condition, and presented evidence of their normal maintenance and inspection routine to show that they acted reasonably in not yet noticing the hazard. However, the court rejected this argument for two reasons. First, the court pointed out that the theater representatives had only discussed what maintenance they normally perform, and would need to have presented evidence of what they did that day to show that they acted responsibly. Second, the plaintiff responded to the claims of a lack of notice by asserting that, while he was leaving the theater, he noticed that the staircase was wet and notified an usher of that fact, but that it was not repaired when he returned 15 minutes later. This would have provided the theater with actual notice and, arguably, sufficient time to clean up the stairs or post warning signs. The plaintiff’s claim was permitted to move forward toward trial.

If you’ve been hurt in a slip-and-fall injury in New York, seek experienced and knowledgeable legal help to ensure you’re fully compensated for your losses by contacting the Hudson Valley personal injury attorneys at Rusk, Wadlin, Heppner & Martuscello for a consultation, at 845-331-4100 (Kingston) or 845-236-4411 (Marlboro).