Lane Departure Warnings Proven to Be Effective in Reducing Accidents 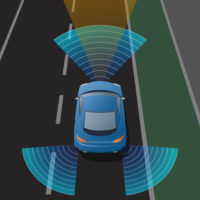 If you drive a late-model car, you may hear a beep or ding, or feel a vibration in the steering wheel, before you change lanes on a busy road. If you’re like many drivers of a late-model car, you’ve found this feature irritating and attempted to disable it. As annoying as it may be, that ringing bell could save your life.

The lane-departure warning has become a common feature in new cars. The ways that lane departure warnings work vary from vehicle to vehicle, but all provide some form of auditory or haptic warning when the vehicle’s sensors identify that the vehicle is swerving out of its lane. The feature is designed to prevent both sideswipe crashes resulting from a car swerving into a neighboring car, as well as head-on crashes that result from a vehicle veering into opposing lanes of traffic. These accidents can be very serious, and in fact they represent a substantial share of all fatal car accidents.

The Insurance Institute on Highway Safety (IIHS) has recently released the results of a study on the effectiveness of lane-departure warnings in preventing accidents. The organization gathered the vehicle identification numbers of cars that were reported to have been in a crash, determining how many of those cars had lane-departure warning systems with information from the manufacturer on which vehicles had the safety feature. According to the results of the study, cars with lane-departure warning systems were involved in 11% fewer single-vehicle, head-on, and sideswipe accidents, and 21% fewer such crashes that resulted in injury. This means that, if all passenger vehicles had used this feature, it could have prevented an estimated 85,000 police-reported crashes and 55,000 injuries in 2015 alone.

The IIHS noted that previous studies have found even more conclusive evidence that lane-departure warnings work to prevent sideswipe and head-on crashes. In a separate study, researchers found a reduction of 86% in the number of fatal accidents among cars with this safety feature. Plus, a 2015 study of large trucks with lane-departure warning systems found that these vehicles experienced a 53% reduction in rates of sideswipe or head-on crashes.

The IIHS noted that the true effectiveness of lane-departure warnings may be even higher. While the statistics from the most recent study show the crash rates of all vehicles that came equipped with lane-departure warning systems, researchers can’t know whether the systems were active or disabled at the time of the accident. Since many car owners disable these systems, it is possible that making them impossible to disable would further decrease the rates of head-on and sideswipe accidents.

If you’ve been hurt in a sideswipe accident or head-on crash in New York, find out if you’re entitled to money damages for your injuries by contacting a seasoned, dedicated, and effective Kingston car accident lawyer of Rusk, Wadlin, Heppner & Martuscello, LLP for a free consultation, in Marlboro at 845-236-4411, or in Kingston at 845-331-4100.