Loose Items on Roadways Can Cause Serious Crashes 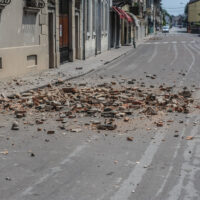 While speeding along a New York highway, you’ve probably ended up behind a few trucks or cars that appeared to be carrying a very precarious load of cargo, and you hoped that you weren’t nearby if the tenuously-loaded items began to fall off. Perhaps you’ve even been one of the unlucky victims of a crash caused by road debris. If so, you are not alone. A recent study published by the AAA Foundation for Traffic Safety has found that road debris-caused crashes are common, and can be very destructive.

While it’s obvious how a large item such as a mattress or table could cause a great deal of damage by falling off the back of a transporting vehicle, even small items can cause serious destruction. For example, a 20-lb object which falls off a vehicle traveling at 55 mph would have an impact force of over 1,000 lbs. if it immediately collides with the car behind it. In order to prevent these accidents, both federal laws governing the commercial trucking industry, as well as New York state laws governing all drivers, prohibit loose cargo from being transported without a cover or tarp to keep the cargo from falling into the road. Drivers who fail to properly secure items they’re transporting, or the company for which those goods are being transported, can be held liable for money damages if loose items fall into the road and cause an accident.

The study by the AAA Foundation for Traffic Safety examined databases of police-reported accidents to determine how many accidents are caused each year by road debris, and how often those accidents result in injuries. The study found that an estimated average of 50,658 police-reported accidents each year were caused by road debris. Those accidents caused an average of 9,805 injuries and 125 fatalities annually. Among the types of accidents caused by road debris—colliding or being hit by an object falling off a vehicle, hitting an object in the road, or swerving to avoid hitting an object—the most fatalities were caused by drivers swerving to avoid hitting an object. These drivers were most likely to suffer a rollover, collide with a vehicle in another lane, or crash into a median or guardrail.

If you or someone you love has been hurt in a crash caused by debris in the road in New York, contact a knowledgeable, compassionate, and dedicated Kingston auto injury lawyers at Rusk Wadlin Heppner & Martuscello, LLP for a consultation on your case, in Marlboro at 845-236-4411, and in Kingston at 845-331-4100.

By RWHM | Posted on December 20, 2016
Skip footer and go back to main navigation