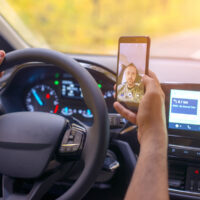 A man who alleges he suffered a traumatic brain injury in an accident with a young woman who was using the Snapchat app while driving is suing both the young driver and the app maker for his injuries.

The accident that spurred the lawsuit occurred on September 10, 2015 in Hampton, Georgia. Christal McGee, then 18, was driving her Mercedes at around 10:00 p.m. along with three of her friends. Wentworth Maynard was attempting to enter the same highway when the collision occurred. Police reports and an expert reconstruction of the accident have clocked McGee’s speed at upwards of 100 mph at the time of the crash. According to McGee and her passengers, Maynard’s car drifted in to McGee’s lane, resulting in the collision. However, according to Maynard’s lawsuit, McGee was using the photography app Snapchat and its speedometer filter to see how high she could get it to go.

Maynard and his wife, in the car at the time, were seriously injured in the ensuing accident. Maynard could not be interviewed by police on the night of the crash, as he was unable to speak. Neither driver received a citation from police on the night of the crash. Maynard would go on to spend the following five weeks in the hospital. According to his lawsuit, the man lost 50 pounds and has sustained permanent brain damage as a result of the crash. He is unable to walk without a wheelchair or walker, and cannot work or otherwise support himself after the accident. On the night of the crash, Maynard was working as a driver for Uber. As McGee was wheeled through the hospital strapped onto a gurney, head still caked with dried blood, she took a photo of herself which she shared on Snapchat with the caption “Lucky to be alive.” Maynard’s attorneys distributed this photo after the accident, spurring a police investigation into the events leading up to the crash.

Maynard recently filed a lawsuit for his medical bills and living expenses against both McGee and the developers of the app. Maynard claims in the suit that this is far from the first time that Snapchat has been made aware of the dangers posed by the speed filter, and online petitions have long called for its removal. Maynard’s lawsuit argues that Snapchat nevertheless refuses to take down the filter. The complaint states that Snapchat has a “responsibility to act reasonably to take steps to eliminate risks associated with their products,” and that, since they failed to remove the filter as reason demanded, the company should be held financially responsible for the harm that resulted to Maynard.

If you or someone you love has been injured by a distracted or otherwise reckless driver in a New York car accident, contact the experienced and trial-ready Kingston attorney for auto accidents at Rusk Wadlin Heppner & Martuscello for a consultation on your claims, in Marlboro at 845-236-4111, or in Kingston at 845-331-4100.