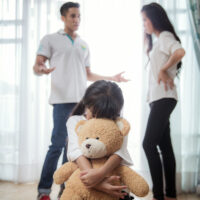 Once you have children with a partner or spouse, many decisions about your lifestyle or where you choose to call home can become a negotiation with your co-parent—even after divorce. In a recent decision by the Appellate Division of the New York Supreme Court, the panel has ruled that a father who frequently visited his children at their mother’s home has a right to insist that the mother not move 30 miles further away, where that move would substantially eat away at the father’s visitation time.

The case, titled Quinn v. Quinn, involved a couple that had reached a stipulation of settlement in their divorce in May of 2013. That settlement had granted residential custody to the mother and frequent visitation to the father, who worked five minutes away from the mother’s home. The father spent several hours between 4 and 6:30 or 7pm each Monday-Thursday evening with the children, beginning when he got off work at 4. One evening in August of 2013, the mother emailed the father to let him know that she had moved about 32 miles away, from East Hampton to Westhampton Beach. The mother explained that this move reduced her commute time to a new job, where she made about the same amount of money as she did at her old job. The move also brought her closer to her parents, whom the children now saw once a week, up from once every two weeks. Upon learning of the move, the father requested an injunction from the court that would stop the mother from relocating to Westhampton Beach. The father was successful in preventing the mother from relocating, and the mother appealed.

In siding with the father, the Appellate Division explained that, in order to relocate with children after a divorce, the relocating parent needs to prove that the move would be in the child’s best interests. Factors contributing to this decision include: weighing what impact a move would have on the children’s contact with the noncustodial parent; how much the children’s and custodial parent’s lives would be improved economically, educationally or emotionally by the move; and whether a move would allow a workable visitation arrangement between the noncustodial parent and children to be preserved.

If you are facing a family law issue and need experienced and dedicated legal assistance for your case, contact the Hudson Valley law firm of Rusk, Wadlin, Heppner & Martuscello for a consultation at 845-331-4100 for our office in Kingston or 845-236-4411 for our Marlboro office.