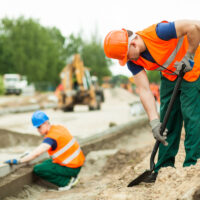 On July 12, a 28-year-old Staten Island construction worker was killed recently while working on scaffolding at a job site in Upper Manhattan. A beam fell from scaffolding off the 13-story Morningside Heights building and struck the worker on the head. He was taken to Mount Sinai St. Luke’s hospital where he was pronounced dead. The building had five prior construction violations, which were all resolved.

The next day, a worker fell down a hole at a worksite in Brooklyn and had to be rescued by firefighters. The worker suffered serious injuries and was sent to Bellevue Hospital for treatment. The city Department of Buildings then responded to a complaint that the worksite was unsafe for workers and sent inspectors that same day.

Most recently, on August 2, a construction worker hurt his leg while working inside 3 World Trade Center and was taken to Bellevue Hospital. The injury was not life-threatening.

NYCOSH found a large decrease in OSHA inspections in NY over the last twenty years, likely contributing to the increase in fatal injuries. NYCOSH found that, in 2014, over two-thirds of safety inspections at work sites in New York found safety violations. Falls are the leading cause of construction deaths: 2015 data from the Bureau of Labor Statistics showed that 49% of deaths in New York state and 59% of deaths in New York City were caused by falls. NYCOSH emphasized that non-union sites are much worse for workers, finding that around 94% of workers who died on private worksites were non-union.

If you or someone you love has been injured in a construction site accident in New York, find out if you have a right to compensation for your injuries by contacting the knowledgeable, effective and dedicated Hudson Valley personal injury lawyers at Rusk, Wadlin, Heppner & Martuscello, LLP for a free consultation at 845-331-4100 (Kingston) or 845-236-4411 (Marlboro).