New Study Reveals the Dangers of Driving on Too Little Sleep 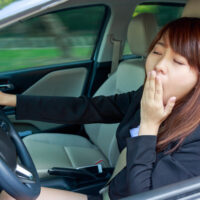 You are likely aware of the dangers inherent in driving while extremely fatigued and at real risk of falling asleep behind the wheel. What you may not realize is how dangerous it can be to drive on even slightly less than the recommended eight hours of sleep a night. A recent study has shown that drivers who have gotten less sleep may be multiple times more likely to be involved in a crash.

The AAA Foundation for Traffic Safety conducted the study, which examined the crash risk related to specific measures of sleep among the general population. The study used data gathered in the National Highway Traffic Safety Administration’s National Motor Vehicle Crash Causation Survey, consisting of survey results collected between 2005 and 2007 on crashes where at least one vehicle involved was too damaged to be driven away from the scene of the accident and an emergency vehicle was sent to the scene of the crash. The data on each crash included assessments made by emergency responders on the factors that contributed to the crash, such as evidence of driver error and environmental causes. The investigators also asked the drivers involved in the crash how much sleep they had gotten the night before, how much sleep they typically received, and whether their sleep schedule had changed substantially in recent weeks.

AAA Foundation researchers studied the involvement of sleep deprivation in crashes by examining the amount of sleep received by drivers whom crash site investigators had determined had made an error or illegal maneuver, or who had failed to react in time to a hazard in the road. This number was compared to the average amount of sleep received by the drivers who had been deemed not at fault in the crash. The researchers found that drivers who had gotten less than seven hours’ sleep in the previous 24 hours, or who had slept for at least one hour less than normal were at a substantially higher risk of being involved in a crash. Compared with drivers who had gotten at least seven hours’ sleep in the past 24 hours, drivers who received between six and seven hours of sleep had 1.3 times the crash rate. That rate climbed to 4.3 times higher for drivers who got between 4-5 hours’ sleep, and reached a shocking 11.5 times greater for drivers who had gotten less than four hours’ sleep. This means that the crash risk increase for those who have gotten four to five hours’ sleep is akin to that of the increased crash risk of someone who is slightly above the legal blood alcohol limit. While the National Sleep Foundation has stated that anyone driving on two or less hours’ sleep is not fit to operate a vehicle, the AAA Foundation recommends expanding that conclusion to state that anyone who has gotten only four to five hours’ sleep should be considered substantially impaired. Victims of drowsy driving crashes should speak with an attorney for help in determining whether they may be entitled to damages for their injuries.

If you’ve been injured in a crash in New York and need help recovering the damages you’re owed for your injuries, contact an experienced, professional, and effective Kingston auto injury lawyers of Rusk Wadlin Heppner & Martuscello, LLP for a consultation at 845-331-4100 in Kingston, or in Marlboro at 845-236-4411.