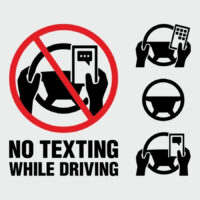 Common sense dictates that drivers who spend time looking down at their phones rather than up at the road while behind the wheel are more likely to be involved in an accident. However, surprisingly little research has been done on exactly how much greater a risk that driver runs of being involved in an accident. A new study has now been released, looking at the association between phone use by drivers and the risk of an accident, as well as what types of phone use are most dangerous. Read on to learn more about the study, and contact a New York personal injury attorney if you’ve been hurt in a crash with a distracted driver.

The new study was released by the AAA Foundation for Traffic Safety. The study looked at the relationship between cell phone use and crash risk by studying video footage taken of over-3,000 drivers over the course of three years using in-vehicle cameras. The study compared the rate of crashes where drivers were shown in video footage to be focused on the road versus when they were seen using their phones. The researchers also compared crash rates during different types of phone use, such as speaking on a handheld phone or completing a task that required both their manual and visual attention, such as texting.

The researchers found that drivers who were doing something on their phone that required both visual and manual interaction had a crash risk that was two to eight times higher than if they were driving without a distraction from their phone. Drivers who were seen talking on the phone had a four-times-higher crash risk than if they were not on the phone. The researchers found no statistically-significant difference between crash rates for drivers who used hands-free devices, but the data on these types of phone conversations was limited. This research could prove helpful in proving at trial that a distracted driver willingly and knowingly imposed a great risk on others on the road by texting while driving.

The researchers also completed a poll of drivers as part of their study and found that drivers don’t always practice what they preach. According to the AAA’s report, “[w]hile more than 66 percent of drivers say that they personally consider it unacceptable for a driver to talk on a hand-held cellphone while driving, nearly 33 percent admit to doing it fairly often or regularly.” Over 80% of drivers stated that texting or emailing while driving is a threat to their personal safety, and 93.7% found it “unacceptable” for drivers to email or text while behind the wheel.

If you’ve been injured in a New York motor vehicle accident, contact a seasoned, dedicated, and effective Kingston car accident lawyer at Rusk Wadlin Heppner & Martuscello, LLP in Marlboro at 845-236-4411, or in Kingston at 845-331-4100.

By RWHM | Posted on February 19, 2018
Skip footer and go back to main navigation