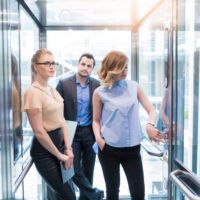 The Appellate Division’s recent ruling came in the case titled Dzidowska v. Related Cos., LP. The plaintiff, Barbara Dzidowska, was attempting to walk into an elevator car when she fell and became injured, allegedly due to the elevator’s misleveling/releveling defect. Dzidowska filed a claim against the owners and managers of the apartment building in which the elevator was located, as well as against Fujitec, the elevator maintenance company. The defendants filed a motion to dismiss the claim. They argued that the elevator had been regularly maintained, including a visit only a week before by Fujitec, and that they did not have notice of the misleveling issue.

The trial court denied the defendants’ motion to dismiss, and the Appellant Division agreed. In order for the owners of a property to be held liable for injuries a visitor suffers on their property, the injury victim must prove that the owner either created, knew about, or should have known about the hazard that caused their injuries. Without some notice of the injurious condition, the property owners can’t be expected to have been able to correct the condition. For example, if it had been the first time that the elevator had misleveled when Dzidowska was injured, the court might have been willing to dismiss the claim.

The Appellate Division ruled that there was more than enough evidence from which a jury could conclude that the defendants were aware of misleveling problems that might warrant taking the elevator out of service. Dzidowska’s attorneys presented evidence from the building’s logbook describing a recurring issue with the elevator misleveling, as well as evidence that the reason Fujitec had been called out the week prior to the accident was to address misleveling problems. The court ruled that this evidence was more than sufficient to sustain a claim against the building, and dismissed the defendants’ motion.

For assistance with a claim for money damages after you or a loved one is injured in a New York elevator accident, contact the compassionate and experienced Hudson Valley personal injury lawyers at Rusk, Wadlin, Heppner & Martuscello, LLP for a consultation, in Kingston at 845-331-4100, or 845-236-4411 in Marlboro.