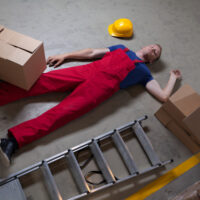 In a recent opinion issued by the New York Appellate Division, the court ruled that a property owner should be found liable under Labor Law § 240(1) to a worker who was injured after being provided with defective equipment by the owner.

Cronin v. New York City Transit Authority, the case in question, was based on claims made by a worker after a ladder fall. Charles Cronin was a laborer working on a project at a site owned by the New York City Transit Authority (NYCTA). Cronin was working in a confined space, and the only ladder available to him that he asserted would fit in the space was a straight ladder that lacked rubber footings to keep it from slipping. The ladder failed, and Cronin fell several feet, becoming injured. Cronin filed a claim for damages against the NYCTA under Labor Law § 240(1) for his injuries, based on NYCTA’s failure to provide him with an adequate safety device to do his work. Cronin filed a motion for summary judgment, asking the court to rule prior to trial that NYCTA was liable under § 240(1) for his injuries based on the facts already presented. NYCTA opposed this motion, arguing that Cronin was the sole cause of his injuries. In support of this fact, NYCTA alleged that Cronin should have used an A-frame ladder in his employer’s van, and that choosing instead the defective straight ladder meant that Cronin was the only person responsible for his injuries. Cronin responded by arguing that the space was too small for the use of an A-frame ladder, and that the straight ladder was his only option to do the job.

Labor Law § 240(1), also known as the “scaffold law,” is an important protection for those working in construction in New York. The law provides a way to recover money damages for workers who suffer injuries related, essentially, to the effects of gravity. The law requires contractors and owners to provide any necessary safety equipment that will offer “proper protection” to those working at a height, such as scaffolding, ladders, hoists, braces, or ropes.

In the current case, the Appellate Division found that NYCTA should be held liable under § 240(1) for Cronin’s injuries. The court ruled that NYCTA had not offered evidence to prove that the A-frame ladder would have fit in the space where Cronin was working, and had also failed to prove that Cronin was instructed not to use the straight ladder. Thus, Cronin was found not to be the only cause of his injuries. The case will now move forward, likely focusing on the issue of the amount of damages Cronin is owed for his injuries.

If you’ve been hurt on the job in New York, seek the compensation you’re owed and contact the effective and dedicated Hudson Valley construction accident lawyers at Rusk, Wadlin, Heppner & Martuscello, LLP for a consultation on your case, in Marlboro at 845-236-4411, and in Kingston at 845-331-4100.