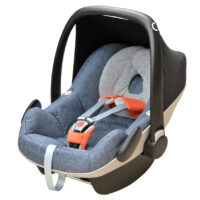 Motor vehicle accidents are the leading cause of death among children in the US. One team of researchers looked at the factors present in fatal traffic accidents to help determine how these accidents might be prevented. Their study revealed that ensuring children are properly restrained could have a major impact on whether or not a child survives a crash.

Study finds restraint use a major factor in child fatalities

Researchers at the Brigham and Women’s Hospital in Boston conducted the study on child fatalities in traffic accidents, the results of which were recently published in the Journal of Pediatrics. The study used data gathered by the federally-operated Fatality Analysis Reporting System between 2010 and 2014 to examine fatal accidents where a child under 15 was involved. Among the 18,000+ accidents fitting this description, about 16% involved the death of a child. This means that about 11 children per week were killed in traffic accidents between 2011 and 2014. The researchers looked at the circumstances surrounding each of these accidents, such as the type of vehicle in which the child was riding, whether the crash occurred on rural or urban roads or highways, the state where the crash occurred, and whether the child was restrained at the time of the accident.

Overall, the researchers found that 20% of children involved in fatal accidents were not restrained, or were not properly restrained, at the time of the accident. In accidents where the child was one of the fatalities, that child was not properly restrained or not restrained at all 43% of the time. In an additional 13% of accidents resulting in a child fatality, the child was riding in the front seat when they should have been riding in the back. Additionally, child fatality rates varied a great deal based on where the crash occurred. Children were more likely to be killed in accidents on rural roads; in fact, 72% of all child fatalities in motor vehicle accidents in New York occurred on rural roads.

When a victim of a motor vehicle accident is not properly restrained when a crash occurs, the at-fault driver may attempt to claim that they should not be obligated to pay the full amount of the victim’s damages. The at-fault driver will claim that the victim could have been less seriously injured had they been properly restrained as required under the law, and thus the victim’s injuries were more severe because of their own negligence. However, this argument won’t prevent you entirely from obtaining money damages after an accident. An experienced New York car accident lawyer can help you nevertheless make a claim for the money that you or your loved one needs to recover, either through a claim under your no-fault insurance policy, or through a personal injury lawsuit.

For assistance after a New York car accident, contact the diligent, dedicated, and trial-ready Hudson Valley personal injury lawyers at Rusk, Wadlin, Heppner & Martuscello, LLP for a consultation, at 845-331-4100 (Kingston), or at 845-236-4411 (Marlboro).