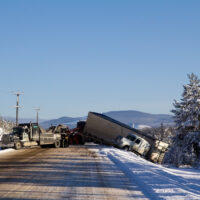 It’s a common occurrence, especially during the winter months, to hear of a hold-up on the roads due to a tractor-trailer or big rig jackknifing. But do you know exactly what that means, why it occurs, and whether such accidents are preventable?

The term “jackknifing” is used to describe a tractor-trailer skidding in such a way that the powered portion of the truck stops while the trailer continues moving forward, swinging out to the side, so that the truck resembles a partially opened jackknife (pocket knife or folding knife). While the drive wheels have locked, the trailer’s wheels have not, so even though the drive wheels have stopped moving, the trailer’s wheels keep rolling forward, typically resulting in a loss of control for the driver, and sometimes leading to a roll-over if the truck is moving at a high enough speed.

What causes a tractor-trailer to jackknife?

Generally, a semi or tractor-trailer jackknifes when the front drive wheels lose traction with the road, causing the wheels to lock up. This is frequently a result of wet, icy, or slippery conditions on the road, but can also result from a truck being forced to brake suddenly due to an obstruction in the road, an equipment failure, use of improper braking technique, or force exerted on the truck from a separate collision.

Can jackknifing be prevented?

Drivers can elect from three separate means of braking when they encounter an obstruction or dangerous patch of road. They can lock the trailer axles, which takes control over the truck’s direction away from the driver. They can lock the steering axle brakes, which allows the truck to keep moving in a predictable forward direction. They can also lock the drive axles, which is what can lead to jackknifing. In an emergency situation, drivers must elect the safest means of braking that will do the least harm to nearby drivers. The driver also has a duty to ensure that their truck is properly maintained, such that a mechanical failure that could result in the truck jackknifing is unlikely. If, after an accident, a truck driver is found to have failed to operate or maintain his truck in the safest manner possible, that driver and the trucking company or employer could be liable for damages to any injured parties.

If you or a loved one have been hurt in a truck crash in the Hudson Valley, contact experienced truck accident lawyers Rusk, Wadlin, Heppner & Martuscello for a consultation on your possible truck accident lawsuit at 845-331-4100 for our office in Kingston, or contact our Marlboro office at 845-236-4411.