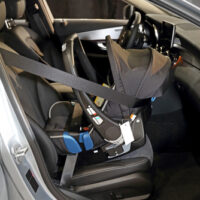 In a study published in the Journal of Traffic Injury Protection, researchers looked at how rear-facing child safety seats functioned when the vehicle carrying the child was struck from the rear. The results of that study were surprising, and a bit troubling, showing that infant children may be at risk for serious head trauma when facing the rear during a rear-end crash.

The study looked at the injuries to which 6-month-old infants were susceptible during a serious rear-end crash, using two kinds of rear-facing safety seat, as well as using either the car’s seatbelts or the car’s lower “LATCH” anchors to secure the safety seat, to determine the different effects of each factor. The researchers found that when the car was struck with sufficient force, the rear-facing seats were prone to flinging forward, whipping the infant’s head into the seat back in front of the infant, resulting in serious head trauma to the infant. The trauma was found to be more severe when the safety seat had been anchored using the “LATCH” anchors, rather than the seatbelts. While the researchers emphasized that using rear-facing seats remains safer than using front-facing seats, they did describe ways that these seats’ safety could be improved, such as by using a tether from an anchor in the car’s floor, as do parent drivers in Sweden.

The American Academy of Pediatrics recommends that children are placed in rear-facing seats until reaching the age of 2, or until they outgrow that position for sitting in their safety seat. Unlike 15 other US states, New York does not require that parents place their children in a rear-facing seat. Instead, New York more broadly requires that children under 8 years of age be placed in a child restraint system that is suitable for the child’s height and weight, according to the manufacturer’s specifications. The state of New York does strongly encourage, however, that children under one year of age be placed in a rear-facing safety seat.

If your child has been injured in a car accident, or has suffered harm as a result of a defective car seat, seek out the compensation you need to bring your child back to health by contacting the Hudson Valley’s experienced personal injury and car accident attorneys at Rusk, Wadlin, Heppner & Martuscello for a consultation, at 845-331-4100 in Kingston or 845-236-4411 in Marlboro.