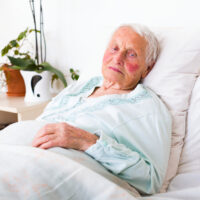 In a reversal of a trial court judge’s dismissal of claims, the New York Appellate Division has recently reinstated a lawsuit brought on behalf of an elderly woman who sustained serious injuries while living in a long-term care facility.

The recently-released opinion was issued in the case of Petralia v. Glenhaven Health Care Org. The lawsuit was initially filed by an 88-year-old woman who was injured while living at the Glengariff Health Care Center. The woman, who suffered from symptoms of dementia, had moved into the long-term care facility in June of 2008. During the eight months between June 2008 and March 2009, the woman had fallen out of her bed eight times. At some point during this time, the facility had created a fall prevention plan and included it in the woman’s patient care plan. On the occasion of the eighth fall, the woman suffered a serious fracture of her femur, requiring surgery to repair it. The woman filed suit against the Glengariff Health Care Center and its parent company, and after she passed away in December of 2011, the woman’s son and the executor of her estate, John Petralia, took over the suit in her place.

Petralia entered an amended complaint which sought personal injury damages for medical malpractice and negligence. He argued that Glengariff had failed to follow the generally accepted safety practices regarding fall prevention in nursing facilities such as theirs. Petralia specifically alleged that the facility had failed to introduce sufficient fall precautions, that they had failed to restrain the woman when necessary, that they had not used bed railings as called for in the woman’s care plan, and that staff members did not respond to a bed alarm as quickly as they should have.

The defendant nursing home filed a motion seeking to dismiss the claim. In doing so, the facility relied on the testimony of an expert who stated that, based on his assessment, the facility had been following all provisions of the fall prevention plan designed for the woman at the time of her fall. The nursing facility further argued that it had taken all reasonable steps to prevent the woman’s injuries, that restraints had not been found to be necessary in keeping the woman in bed, and that staff had, in fact, responded in a timely manner to the woman’s bed alarm. Petralia responded by presenting the testimony of his own expert who believed that bed rails had not been in use when the woman fell, despite being included in her fall prevention plan. This expert also asserted that the facility’s failure to have a backup fall prevention plan, along with the other lapses in fall protection, amounted to a breach of the professional standard of care. Despite this evidence, the trial court decided the motion in favor of the defendants. Petralia appealed.

The Appellate Division sided with Petralia, reinstating his lawsuit. The Appellate Division ruled that a dispute existed over whether or not the facility had used bed rails on the day of the woman’s fall, and that the absence of bed rails could be seen as the proximate (or, major) cause of her fall. In New York, the court pointed out, “a facility may be held liable for the failure to follow a physician’s order to use bed rails or if the facility’s protocols establish that bed rails are to be used.” (Internal citations omitted.) The Appellate Division ruled that the claim should go to trial, in order to allow a jury or judge to determine whether or not the bed rails had been used on the day of the accident, and thus whether or not the facility was in compliance with standard safety procedure or the woman’s fall prevention plan.

If you or someone you love has been injured in an incident of nursing home abuse or malpractice, contact the seasoned, compassionate, and effective Hudson Valley nursing home negligence attorneys at Rusk, Wadlin, Heppner & Martuscello, LLP for a consultation on your case, at 845-331-4100 (Kingston), or 845-236-4411 (Marlboro).