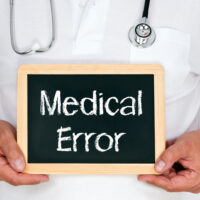 According to two researchers from the Johns Hopkins University School of Medicine, medical errors have become a serious problem in the US, accounting for a substantial share of all deaths nationwide. Dr. Martin Makary and Michael Daniel argue, based on their research, that, were deaths from medical error reported in the same manner as deaths from diseases or accidents, they would be the third-largest cause of death each year. According to data published by the Centers for Disease Control and Prevention (CDC), heart disease causes over 599,000 deaths each year, cancer over 582,000, and chronic obstructive pulmonary disease (COPD) approximately 149,000. Based on Makary and Daniel’s estimate, medical errors are responsible for 250,000 deaths, a number which does not appear on the CDC’s ranking, and displaces COPD as the cause currently ranked at third. There are more deaths caused by medical errors than there are deaths caused by auto accidents, firearms, or suicide each year.

The reason why this number does not gain more public attention and concern, argues Makary, is in part because of how causes of death are reported on death certificates. When an individual dies, the doctor, coroner, medical examiner, or funeral director is responsible for choosing among a list of cause-of-death codes generated by the International Classification of Disease to list on the death certificate. While codes can be selected for a variety of diseases, there is no code that represents a death caused by human or system factors. This means that, when a physician’s error was the cause of a bleed resulting in the patient’s death, the hemorrhage would be cited as the cause of death on the certificate, not the physician’s error. Currently, medical errors resulting in patient injury or death tend only to be discussed by internal hospital forums and review boards. Making medical error an available choice as a cause of death would allow the public at large and policy experts working in the medical field to more fully understand and address the problem of medical error.

The researchers cited one particularly tragic case to offer an example of a preventable medical error that resulted in a death. A young woman who had undergone a successful transplant operation sought medical attention for vague health problems and was subjected to a number of tests, some of which were unnecessary. During one of the tests, a doctor’s needle scratched the woman’s liver, which eventually resulted days later in an internal hemorrhage and cardiac arrest. It was only during an autopsy that the hospital realized that a doctor’s error had led to the internal bleeding. The woman’s cause of death was nevertheless listed as cardiovascular.

If you or a loved one have been the victim of a harmful medical error, such as a surgical error, delayed diagnosis, or birth error, ensure that you receive the compensation you need to heal by contacting the knowledgeable and compassionate Hudson Valley medical malpractice attorneys at Rusk, Wadlin, Heppner & Martuscello for a free consultation, at 845-236-4411 in Marlboro, or in Kingston at 845-331-4100.