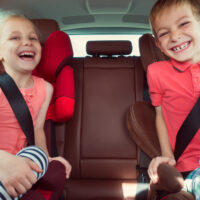 One of the most persistent myths people hold about motor vehicle safety is that, since they won’t fly through the front windshield, seat belts are unnecessary for passengers sitting in the back seat of a car. New research shows how differently average Americans view the safety concerns involved in not wearing a seatbelt in the front versus the back seat, despite the risks faced by any unbuckled vehicle occupant.

When survey participants who admitted that they didn’t wear a belt when sitting in the back seat were asked why they abstained, about a quarter of respondents said that they believed that sitting in the rear seat was safer, making a seat belt unnecessary. Thirteen percent of respondents said that it just wasn’t a habit of theirs or that they forgot to wear one. Twelve percent said they found seat belts uncomfortable, and 10% found them difficult to use. The final 9% said that they didn’t wear one because they weren’t required by law to do so.

Merely sitting in the back seat of a vehicle does not protect you from a risk of injury in the event of a crash. Seat belts are a necessary precaution for any vehicle occupant. Back-seat passengers who weren’t wearing seat belts when the vehicle they occupied was involved in a crash were eight times more likely to suffer serious injuries in an accident than someone who was safely buckled in.

Not only are these passengers putting themselves at risk by failing to buckle up; they are also putting others’ lives at risk, as well. When someone in the back seat isn’t buckled in, their body can become like a massive projectile, injuring those sitting in the front seat as well as themselves. Drivers are roughly twice as likely to be killed in crashes where a back seat passenger is not buckled in.

If you or your loved one has been injured in a New York car accident, contact the dedicated and effective Hudson Valley personal injury lawyers at Rusk, Wadlin, Heppner & Martuscello, LLP for a consultation on your claims, at 845-331-4100 (Kingston), or 845-236-4411 (Marlboro).