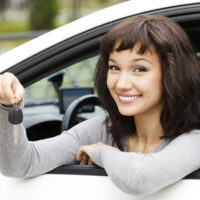 While kids are home on summer break, they’re more likely to be commuting to a summer job or to friends’ houses using the family car. Memorial Day marked the beginning of the so-called “100 Deadliest Days,” a period where the average number of teen motor vehicle fatalities is highest. Read on for more information on teen driver safety, and ways you can help keep your family’s teen driver safe on the road this summer.

As any parent probably knows, more young lives are lost in car accidents than in any other manner, and in fact half of all teenagers will be involved in a car crash before graduating from high school. Local news reports often include stories of teens being injured or dying in accidents; in fact, a recent early morning single-car crash in the Orange County town of Tuxedo resulted in the death of one teen and serious injuries to another. While poor judgment can often play a role in teen accidents, safety advocates suggest that inexperience is the main reason for the higher rate of accidents among teens.

Here are some suggested restrictions on teen drivers you may want to implement in your own household:

While there are greater rates of crashes for all drivers at night, the risks to teen drivers increase greatly after sunset. According to the National Safety Council, 16- and 17-year-olds are three times as likely to be involved in a fatal crash at night than during the day, and 16% of all car accident fatalities for teen drivers between 15-19 occur between 9pm and midnight. New York already bans unsupervised driving between the hours of 9pm and 5am for drivers under 18. Ensure that you help to enforce these restrictions, and consider extending them beyond the legal restraints where you feel it might be necessary to protect your child’s safety.

Studies show that 60% of accidents involving teen drivers stem from distracted driving. Behind-the-wheel use of cellphones, hands-free or not, is especially dangerous for teen drivers. Make sure that they know how important it is that they do not text or make calls while driving, but also that they do not manipulate the music or GPS functions on their phone except when parked. Putting the phone in do not disturb mode, or using apps that block texting while driving, can help to promote these safety ends.

When a young driver has a passenger in the car, their chances of being involved in a crash increase by 44%. New York state makes it illegal for drivers under 18 to drive with more than one passenger under the age of 21, but instructing your child that any passengers in the car can be dangerous might be an even safer step to take.

If you or your loved one has been injured in a car accident in New York, seek the compensation you’re owed as the victim of another driver’s negligence by contacting a Kingston attorney for auto accidents of Rusk, Wadlin, Heppner & Martuscello for a free consultation on your case, at 845-331-4100 in Kingston or 845-236-4411 in Marlboro.