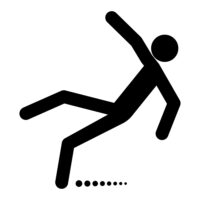 Apartment building managers and property owners have an obligation to keep their premises safe for visitors and residents. What that obligation entails in practical terms will vary based on the conditions of the building and the governing building code, but it may include nonslip mats, hand railings, and lighting sufficient to prevent a fall. A recent opinion by the New York Appellate Division allowed a slip-and-fall claim based on inadequate lighting for a lobby staircase to move forward to trial.

The case in question is Haibi v. 790 Riverside Drive Owners, Inc. The accident victim, Erasmo Haibi, fell and hit his head on a marble step while he was ascending a small staircase in his building’s lobby. A surveillance camera captured the fall. The property manager and Erasmo’s granddaughter, Danette, watched the video on the day after the accident. Danette requested a copy, as did the family’s attorneys. However, the building’s management taped over the footage before saving a copy.

Months later, Erasmo died from injuries not related to the accident. Unfortunately, he did not complete a deposition on his slip-and-fall claim before passing away. His son and estate administrator, Roberto, filed a claim on Erasmo’s behalf after his death, claiming among other things that the building’s owners and managers were negligent in failing to provide adequate lighting of the stairs. In support of his claim, he included the testimony of his daughter, who described the staircase as being inadequately lit in the video. Haibi also included the report of an expert who conducted an objective measurement of the lighting on the stairs. The expert found that the lighting did not meet the brightness level deemed “adequate” in the 1968 or 2008 building codes.

The defendants fought to have the claim dismissed through a motion for summary judgment. In support of their motion, they presented testimony from a neighbor who witnessed Erasmo’s accident. The neighbor stated that Erasmo fell because he did not watch where he was going, and not because of inadequate lighting. The building’s managers also presented photos of the lighting present at the time of the fall, which they claimed to be proof that the lighting was sufficient to prevent falls. The defendants also argued that, since there was no definitive proof that poor lighting is what caused the fall, the claim must be dismissed.

The Appellate Division dismissed the defendants’ motion, ruling that there was sufficient evidence to support a jury finding in favor of the accident victim. The court noted that insufficient lighting could itself be considered a hazard. The Appellate Division noted in its opinion, “[I]nadequate lighting itself may constitute a dangerous condition where the inadequacy of lighting renders the appearance of premises deceptive. Such deception occurs by the illusion that two areas of the same premises are on the same level whereas, in fact, there is a change in floor level to which the available lighting does not call sufficient attention.”

The court found the expert’s objective measurement of the amount of light over the staircase persuasive. Their opinion explained that, even though the building code that applied to the building predated the 1968 version, the older building code still required that lighting be “adequate,” and the 1968 and 2008 building codes simply added an objective definition to the term “adequate.” The court explained, “We perceive no reason why adequate lighting in 1916 would differ from adequate lighting in 1968 or 2008.”

The Appellate Division found it unpersuasive when the defendant argued that, even if the lighting was poor, that might not have been the cause of the accident. The court explained that, so long as a plaintiff provides evidence of a hazard and evidence that the hazard could have caused the accident, they did not need to provide further evidence that it was that hazard in particular that caused an accident. Additionally, since the defendants had destroyed what might have been a valuable piece of evidence by taping over the surveillance video, a jury would be entitled to assume that the video was unfavorable for the defendants and favorable for the plaintiffs. The claim may now move forward toward trial.

If you or someone you love has been injured in an accident in New York, find out if you’re entitled to money damages for your injuries by contacting the knowledgeable and dedicated Hudson Valley personal injury lawyers at Rusk, Wadlin, Heppner & Martuscello, LLP for a consultation, in Kingston at 845-331-4100, or in Marlboro at 845-236-4411.