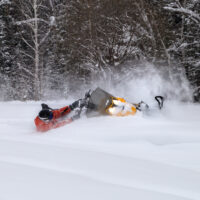 An Ulster County accident has resulted in the death of a young man riding a snowmobile. The crash between a snowmobile and ATV provides a tragic reminder that drivers of motor vehicles of all kinds must exercise care while driving. If you’ve been injured in a snowmobile accident in New York, contact a skilled personal injury lawyer with any questions.

The recent accident occurred in Tillson on Sunday, December 17, 2017. A 25-year-old Tillson resident was driving a snowmobile on a field that runs parallel to a wood line on private property near Tillson Road. Deputies from the Ulster County Sheriff’s Department reported that an ATV being driven by a 23-year-old man, also from Tillson, entered a gate to the field, crossing the snowmobile’s path. The driver of the snowmobile, who was not wearing a helmet, was declared dead at the scene of the accident. The ATV rider was injured seriously but was expected to survive. Deputies believe that the drivers’ visibility was hindered by the wood line’s foliage.

New York Snowmobile accidents are a common problem in winter

According to the New York State Office of Parks, Recreation and Historic Preservation (OPRHP), thousands of New York residents are injured in snowmobile accidents every year across the state. The OPRHP operates over 10,000 miles of snowmobile trails across the state and requires that anyone riding on those trails carry snowmobile insurance and, if under 18, a safety certificate. The OPRHP estimates that about ten New York residents are killed each year in snowmobile accidents, many of which are the result of negligent or reckless behavior by drivers. Just as with motor vehicle drivers, snowmobile drivers must exercise care when riding, driving at a safe speed according to the current conditions and paying full attention to other riders. If snowmobile drivers are found to be driving at a reckless speed, using dangerous or careless maneuvers, or are driving while intoxicated, they may be held liable for another person’s injuries in a resulting accident. A Hudson Valley personal injury lawyer can help you determine whether you should file a lawsuit based on a snowmobile accident.

If you or someone you love has been injured in a New York snowmobile accident, find out if you have a claim for money damages by contacting the dedicated and knowledgeable Hudson Valley personal injury lawyers at Rusk, Wadlin, Heppner & Martuscello, LLP for a consultation, in Kingston at 845-331-4100, or in Marlboro at 845-236-4411.

By RWHM | Posted on December 29, 2017
Skip footer and go back to main navigation