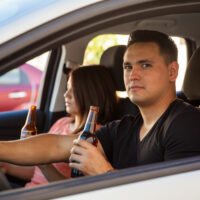 It should come as no surprise that teens and alcohol are a dangerous combination, or that teens are the age group most likely to lose their lives in a traffic accident. However, a recent study makes it even clearer that alcohol is responsible for a troubling share of teen deaths on the road. Read on to learn about the effect of alcohol on teen roadway safety, as well as the measures that have been found successful in reducing fatality rates among drivers and passengers in their teen years.

The recently-released study was conducted by Dr. Scott Hadland of the Boston Children’s Hospital. Dr. Hadland has become an expert on teen alcohol and drug use as a specialist in adolescent and addiction medicine. According to his research, about half of all teen deaths in traffic accidents involve alcohol. Not all of these accidents are the result of teens themselves doing the drinking and driving; only in about half of those cases are the drivers under 21 years old. Dr. Hadland added, “the vast majority of people under the age of 21 dying in car crashes are dying in evenings, on weekends. It’s a high risk time to be out on the road.”

With his recently-released study, Dr. Hadland set out to determine how the network of laws and regulations in a given region impacted the rate of teen deaths on the road, rather than studying the impact of one law in particular. This included laws with a direct impact on teen driving, such as graduated licensing laws like that in effect in New York, as well as laws on the permissible density of liquor stores, and even restrictions on alcohol advertising.

Dr. Hadland’s research team discovered that, the more alcohol-restricting policies a state had on the books, the fewer teens died in traffic accidents. The research team found that the effects of the laws extended not only to teen drivers, but also to teenaged passengers. A fellow researcher, Dr. Kirsten Bechtel of the Yale School of Medicine, noted, “restricting access to the opportunity for unsafe behavior through legislation has been shown to be a successful public health approach to reducing preventable injuries and deaths.”

If you or a loved one have been injured by a reckless or drunk driver in New York, find out if you have a claim for damages by contacting an experienced and compassionate Kingston car injury lawyer of Rusk, Wadlin, Heppner & Martuscello, LLP for a consultation, at 845-236-4411 (Marlboro), or 845-331-4100 (Kingston).