Using a Dash Cam Could Support a Claim for Damages 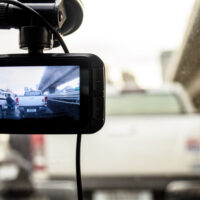 Dashboard cameras, commonly known as “dash cams,” used to be items only found in police vehicles and only rarely in those of the average driver. With an increase in the number of affordable dash cams on the market, more and more drivers have begun to install them in their vehicles. Dash cam footage can be useful for many reasons, including as evidence in a claim for damages after a serious auto accident, as well as a security measure.

How do dash cams work?

Dash cams are small, typically no bigger than a deck of cards. The cameras are mounted to either the vehicle’s windshield, dashboard, or rear-view mirror to record front-facing footage, and some models can be wired to record footage behind the vehicle, as well. Advanced models are able to record audio and video within the vehicle, stream to the internet, or offer a 360˚ view. Drivers can buy a dash cam for between $70 and $250. Dash cams typically record chunks of time referred to as “loops,” ranging in length from 3 to 5 minutes, depending on the model. Once the camera’s memory card is full, it will record over the oldest loop.

How can a dash cam be useful to the average driver?

Footage from a dash cam can be very useful after an accident. If the driver is involved in a hit-and-run accident, the camera can be useful in recording the at-fault driver’s license plate or vehicle make and model. If the drivers dispute the events leading up to the crash, the footage can provide an objective account of what happened. Camera footage will always be more reliable than even the most attentive eyewitness.

Dash cams can also be used to provide personal and property security. Some models can be triggered to permanently record an incident after the vehicle experiences an impact. For example, if someone attempts to break into the car, the camera will permanently record the moments immediately before and those after the impact, to aid the driver in identifying the thief. Likewise, a driver might find a dash cam useful if getting into a parked car alone at night, or if approached while stopped at an intersection.

If you or someone you love has been hurt in a New York car accident and you need help determining if you should pursue a legal claim against the driver, contact the dedicated and effective Hudson Valley personal injury lawyers at Rusk, Wadlin, Heppner & Martuscello, LLP for a consultation, in Marlboro at 845-236-4411, or in Kingston at 845-331-4100.