What are the Top Causes of Rollover Crashes? 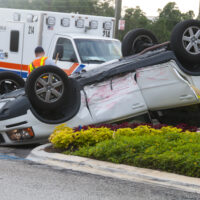 Rollover accidents are not common, but they are one of the deadliest forms of motor vehicle accident. While only about 3% of all traffic accidents are described as rollover accidents, these crashes account for 30% of all traffic fatalities. Rollovers occur when vehicles are knocked off-balance and their center of gravity is shifted to one side, but the factors which lead to a rollover can vary. Below, you’ll find some info on what causes vehicles to roll over. Speak with an experienced Hudson Valley auto accident attorney as soon as possible if you’ve been injured in a rollover crash.

“Trips” in the road can cause a rollover crash.

“Trips” are a term used to refer to some object or impediment in the roadway, such as a pothole, curb, or soft shoulder. When a vehicle hits a trip, especially if traveling at high speed, it is more likely to rollover.

Vehicles with higher centers of gravity, such as large vans, trucks, or SUVs that are lifted higher than the average vehicle on a narrow wheel base, are more likely to roll over due to their top-heaviness.

Suddenly jerking the wheel can throw a vehicle off-balance.

Speed can play a role in rollovers, especially when the speeder is following other vehicles on the road too closely. When not allowing a safe distance between themselves and other cars, suddenly-slowing traffic or an object appearing in the roadway could cause the speeder to have to jerk the steering wheel abruptly. This can cause the vehicle to roll over due to the sudden shift in momentum.

Rain, snow, or ice making the road more slippery can make rollovers more likely, as can roads in poor states of repair.

Surprisingly, tires with too much grip can make a rollover accident more likely. Tires that are excessively grippy can cause sideways forces to build up until the vehicle rolls over, whereas tires with less grip might lose some of that force through losing some amount of contact with the road.

Rollover crashes are complicated. If you were the victim of a rollover accident in New York, find out if you have a claim for money damages by contacting a seasoned and dedicated Kingston car injury lawyer of Rusk, Wadlin, Heppner & Martuscello, LLP for a consultation on your case, in Marlboro at 845-236-4411, and in Kingston at 845-331-4100.