What Might You Include in Your New York Prenuptial Agreement? 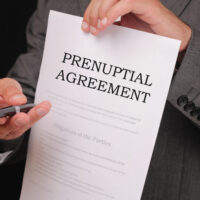 Before getting married, more and more New York couples are opting to create prenuptial agreements. These agreements can simplify the process of getting a divorce in the event a marital dissolution becomes necessary. Prenups allow couples to avoid expensive, drawn-out trials by making fair and reasonable decisions about how to divide property in advance of a split. These agreements are especially critical for couples where one or both members have been married before. Even if you know you need a prenuptial agreement, do you know what to include in it? Read on to learn more about what to consider including in your prenuptial agreement, and speak with a knowledgeable New York family law attorney with any additional questions.

Address the question of spousal support

Decide who will pay which debt

Determining in advance which spouse will pay which of the couple’s debts, instead of dividing them all in half, can simplify the process of separating your finances from those of your spouse upon divorce.

Prenuptial agreements can include agreements regarding which spouse will receive important assets, such as the house, car, or artwork, upon divorce. Spouses can also specify that certain property should remain separate or be considered marital, regardless of when it was obtained.

Choose the state whose laws will govern

If you and your spouse divide your time between multiple states or countries, you may wish to include a clause that New York law will govern your agreement.

Include a sunset provision

If you’re planning to get married in New York, get help handling the legal issues that follow, such as revising your will or creating a prenuptial agreement, by contacting the dedicated and knowledgeable Hudson Valley family law attorneys at Rusk, Wadlin, Heppner & Martuscello, LLP for a consultation, at 845-331-4100 (Kingston), or at 845-236-4411 (Marlboro).

By RWHM | Posted on September 20, 2017
Skip footer and go back to main navigation